One of Premier Modi’s ‘big ideas’ for India is the promotion of a group of a hundred ‘Smart Cities’. The hundreds of initial applicants have been assessed by what they have already achieved, for example in collecting revenue. But the second stage is to be judged in terms of the quality of citizen participation and their economic and environmental impacts, so the use of Information Technology is very much a means to wider ends. The first group of Smart Cities have predictably been leading cities such as Jaipur or Coimbatore in Tamil Nadu, and Kochi in Kerala came fifth in the scoring. However the real challenge of urban growth is to develop the hundred Metro cities, that is the third tier cities with populations between 500, 000 and a million. This would take the strain off mega cities like Chennai, which grew by 40% between 2001 and 2011, compared with an average of only around 15% for the six other largest cities in the State of Tamil Nadu. So what would ‘smarter growth’ look like?

Certainly established cities are likely to double in size over the next two generations. Further urbanisation is inevitable, as currently only 30% of Indians live in towns, whereas the world average is 50%. With rising expectations and educational levels, young people no longer want to stay in the villages, so the three big questions are where should they go, how can they earn enough to support both themselves and their families, and what can be done to raise agricultural productivity and incomes? The urban infrastructure is already overloaded, even before car usage rises to Western levels, and pollution levels in mega cities such as Delhi are among the worst in the world.

Even the ‘garden city’ of Bangalore is losing its appeal. India’s motor industry now employs 27 million, mainly in the North of Tamil Nadu, and as the little Tata car/taxi is starting to replace the Tuc Tucs you see everywhere, rising car ownership seems inevitable. One of the highest economic growth rates in the world (over 7%) is largely benefitting the middle classes, and those who already own property. With growing families, especially among the Muslim households that represent a quarter of the population of Kerala, for example, the potential for conflict is huge as people compete for space. India urgently needs to learn how to avoid the mistakes of both urban sprawl and high rise tower blocks that characterise urbanisation in the USA and China. So ‘smart cities’ need to adopt very different growth models if they are to avoid unacceptable inequalities.

Connectivity should be the starting point, as surveys show that congestion is a major concern. Returning after a couple of years to Kochi City, the commercial capital of Kerala, development seems to be happening everywhere. A new international terminal will allow the existing one to serve domestic flights, and will be linked up with the new Metro that is under construction. Interestingly the original fine building was built without delay or corruption, which shows it is not endemic. Kerala has benefitted from a progressive Communist government, which alternates every five years with the Congress Party. Competition for votes has brought about widespread land redistribution, and infrastructure is much better than much of the rest of India.

While there are sometimes said to be more potholes than roads, we drove generally along fine surfaces. The absence of pavements (as India seems to have invented ‘shared surfaces) allows vehicles to overtake on narrow roads, but cyclists have to compete with cars. Work is far advanced on the first line of Kochin’s overhead Metro line, and the first trains are being tested out. It has benefited from German funding. An integrated transport system will include upgraded water transport, funded by the Japanese who will also take over the main buses. Alas apart from an editorial in the Hindu calling for India to learn from London on how to regulate buses, British investment is rare, (though advertising hoardings in English are everywhere!) How can public transport cope if housing development is so unplanned?

In India, where 40% of the world’s under-nourished people live, the poor are losing out from growth. Some squeeze into slums threatened with redevelopment, or live in villages that lack basic utilities. Erratic electricity supplies require investment in renewables, but no visible use is currently being made of solar power (except for the extraordinary ‘solar farm’ that powers Kochi International Airport). Water runs out in the hot summer months, as storage reservoirs have silted up, and tube wells in Tamil Nadu are no longer tapping fresh water, despite burrowing ever deeper. Proposals to extend the great 28km lake at the top of the Western Ghats in Thekkady are understandably opposed by those in Kerala who would like their own hydro system. They fear that a dam built by Colonel Pennycuik in 1895 to irrigate parched Tamil Nadu could easily collapse.

There are more mobiles than toilets, but little chance of connecting them to proper sewers, as there is not enough water to flush them. Food too, while seemingly plentiful in the markets, leaves many hungry. Some 40% is estimated to go to waste due to poor storage and distribution systems. At the start of the harvest the rice millers were refusing to take deliveries because the support price was too low. ‘Haphazard development’ is made worse by corrupt planning, reliant on private developers selling ‘dream homes’, which is leading to new housing going up where it is disconnected from public transport. This further overloads the inadequate infrastructure, leading to private pumps and reliance on water tankers. Only 45% of households in Tamil Nadu have their own toilets compared with 95% in neighbouring Kerala. So there is huge potential not just for building better new homes but also for upgrading what already exists for example through ‘composting toilets’ that help replenish the poor land as well as sewers that protect the watercourses. Smarter cities need to avoid eating into well-irrigated areas, and to make much better use of natural resources such as water and solar power.

Maintaining India’s special character also matters, particularly as far as earnings from tourism are concerned. Fine waterside warehouses along Bazaar Road, once used for storing spices, are still decaying, though supposedly protected by being in a ‘heritage zone’. Several blocks been transformed as boutique hotels, including Xandari Harbour, developed by an American with Indian money, and the nearby Museum Granary Hotel with its fine jetty. Within the Old Town of Fort Kochin, elegant homestays, such as the Francis Residence, allow the visitor to sample real Southern Indian friendliness and the superb food, mainly vegetarian and fish.

Kerala benefits from the diversity of its communities (a quarter Hindu, a quarter Moslem and a quarter Christian). Alas there are now only seven Jews left to use the 18th century synagogue in Jew Town at one end of Bazaar Road in Kochi, but the old houses have been turned into a fine choice of shops. Elsewhere, different sects of Christian churches compete with their grand buildings (perhaps benefitting from funds intended to tackle the effects of the tsunami?) However in the bid to be one of Premier Modi’s 100 Smart Cities, Kochi scored poorly on refuse collection, which is a universal problem for Indian cities, and the city has responded by discouraging plastic packaging. The old water channels that the British built a century ago have become clogged up by development, and are no longer flushed by the tides. Though Kochi has dredged out its port, it is not making the most of its waterways (unlike neighbouring Alleppy with its extensive ‘backwaters’).

In Tirunelveli, one of the most ancient towns in Tamil Nadu, progress was less evident. The city is 56th in the national list of potential smart cities, along with many other similar sized towns. The population is currently just under 500,000 and grew by 15% between 2001 and 2011. Consultations have shown the main concern as accommodating traffic and dealing with water shortages. However the city is superbly located for further growth, as it is the junction of four railway lines and major roads. A year ago the City had said it was not interested, but there is now a Smart Cities officer, a former water engineer, with a small team based in the Municipality’s fine new offices, supported by a consultant from Chennai. Public transport, a combination of old buses and ubiquitous tuc tucs, are rated as good. The superb railways, now largely electrified, concentrate on long distance passenger services. But there are only four to eight trains a day on the line that runs out to Chermanadevi, SCAD’s local station, each with over 20 heavy coaches, and the potential for concentrating development around existing or new stations has not yet been taken up.

The second stage bid predictably tries to use IT to the full, with proposals for extensive CCTV cameras and water and energy meterage. But the most interesting elements are treating the historic core as a visitor attraction by removing traffic and creating a ‘lakefront promenade’. A 250 acre new settlement within the 10 km limit of the city’s boundaries, is also proposed, applying new technology. Discussions on the vision with some 3,000 stakeholders revealed the main concerns were congestion and erratic water supplies, and the City would like to clear out the waterways and build storm water sewers. But as the city grows and car usage increases from the suburbs, the quality of life in the centre could easily follow the path of mega cities, such as Chennai, where the air is virtually unbreathable and over-crowding is rife

So there is everything for the visitor except other tourists, as many have been scared away by the troubles in the Middle East, the recession in Europe, and competition from other places, such as in the Far East and Latin America. There is also huge potential for British investment, which so far seems confined to the involvement of the London School of Economics in the evaluation process. This is a great pity as there is so much potential for rebuilding the historic links between Britain (and indeed the Netherlands and Portugal). English is widely spoken and the ubiquitous signs and billboards are in English! Perhaps, given the widespread concerns about corruption and bureaucracy, there is scope for British investment in project management and development, as we share many of the same challenges!

A new metro is under construction in Kochi 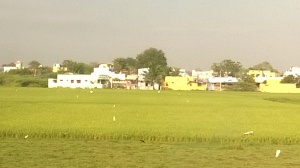 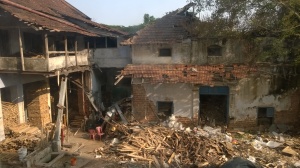 The historic character could easily be lost 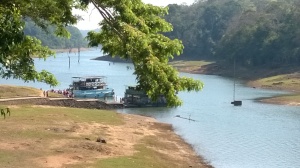 Water levels in the reservoir are low 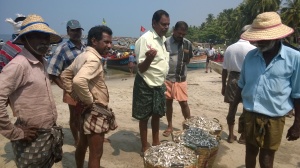 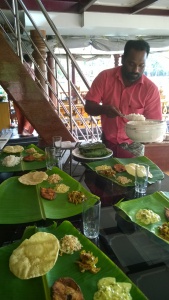 The water potential has not been tapped except in the ‘Backwaters’

Cruising on the ‘backwaters’