A model for urban conservation

A change of government  after 30 years is a good time to review what is happening in the centre of this tropical island of 25 million, which for many years was notorious for human rights violations during its long civil war, and which is now attracting a lot of investment.

Rich history
First colonised by the Portuguese,then the Dutch, Ceylon enjoyed 150 years of British rule until we left in 1948. The traces can be seen in the old centre, which until 5 years ago was virtually a no-go area. Historic building include the  faded Great Orient Hotel opposite the Port building, the empty GPO,  a 1912 Scottish department store, and a small disused railway station where a start is being made on a museum that brings out the Colonial past.

30 years of conflict
Civil war from  the 1970s between the Tamil minority in the North of the island and the Sinhalese majority was only ended five years ago by the President who has just been ousted. Colombo’s untidy mix of new and old is therefore very recent. Chinese money has moved in to rebuild the capital with stylish hotels and office blocks for the rebuilt financial district, as Colombo seeks to copy cities like Singapore and Hong Kong. Though Sri Lanka prides itself on its Buddhist heritage, visits to the historic sites reveal a bloody past. It seems that the Tamils (who are Hindus) were there first, then lost out to lighter coloured Indians from the North (who are Buddhist), and then the English brought in fresh Tamils to work in the tea plantations, thus further stoking the conflicts of caste, religion and race.

Resourceful conservation
Tourists have doubled in the last year to 1.2 million but still seem rare as most prefer the beaches and ‘cultural triangle’ in the centre of the island. Most miss the extraordinary achievement in rebuilding the old Dutch Fort. Faced with so many derelict buildings the President decided to call in first the Army and then the Navy to restore the buildings and rebuild the streets. They have not only done a superb job but have trained a large body if skilled construction workers. There are now fine restaurants and specialist shops, and it can only be time before the old hotels are restored to their former glory. The Galle Face Hotel, which is classified as the best hotel, is under renovation and is being extended, with some of the work being undertaken at night, which detracts from the general air of calm. Tours can be made round the old home of Geoffrey Baha, who designed many fine buildings.

The new imperialism
The President lost office because prices escalated and he was seen as enriching himself. The new president wants greater equality and is questioning some of the deals made with the Chinese such as building a new port. Major roads are under reconstruction to cope with the monsoon rain, and the Chinese contractor has bought a fleet of JCBs , which can be seen every few miles sitting beside a road  leading to Dambolle and the ‘cultural triangle’.  China is supplying expertise and finance to provide export opportunities for its own industries, and the projects may not  be the ones the country most needs.   Sri Lanka already has large debts, but this time the debts will be to an Asian master. One example is the area near the Airport, which is where the main manufacturing industries are concentrated as well as some of the new housing. Speculation over future development has left many former rice paddy fields unattended. As a result Denghi fever has become a problem as  mosquitos breed in the stagnant waters.

Conclusion
Flying from the ancient city of Madurai in Tamil Nadu into Colombo the contrasts are huge. Cleaner streets, ample pavements, new zebra crossings, cars rather than motor bikes along with modern buildings suggest a city on the move. Both are vulnerable to urban sprawl along improved roads, as those who can move further out, and drive in rather than use public transport. Both cities claim to care about the environment and have huge untapped tourist potential. They also both have an  exceptionally  friendly (and English speaking) people, excellent cuisine, and a climate that is hot and sunny when Europe is cold and gloomy. But  though Southern India is much poorer than Sri Lanka, women in colourful saris, finer tasting food,  and huge old Hindu temples part given over to tailors who can fashion up garments in a couple of hours,  create  a richer culture, and one that needs to be protected from foreign investment.

Reminders of the civil war 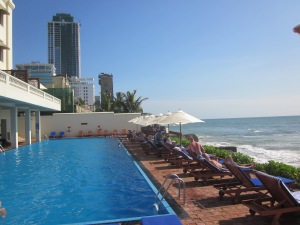